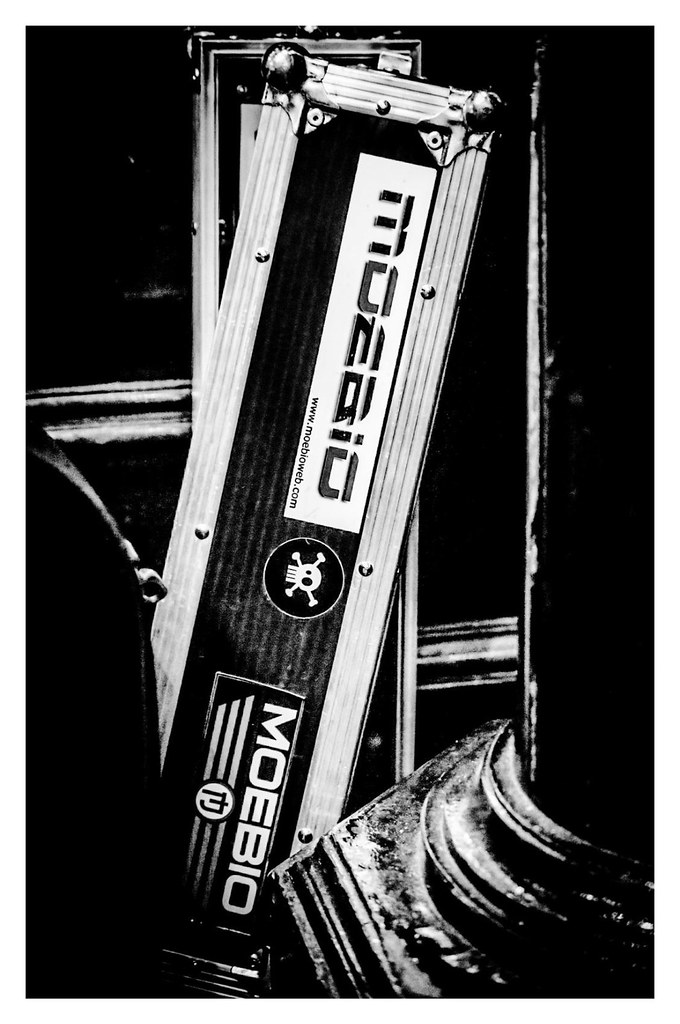 Its name comes from Moebius ruban, also known as infinite loop ruban, invented by an eccentric German scientist in the mid 1800s. Also immortalized by writer Julio Cortázar, in his story Moebius Ring .
MOEBIO was born in Madrid in late 2006 with the goal of being a circle of artists in constant motion. His style defined as rock, has as its starting point the poetry and elegance, which reigns in all his compositions.
In 2007 the group enters Oasis Studies of Madrid, on hands Jorge Escobedo , rock producer and composer guitar of the famous formations SOBER < / em> and SKIZOO . The Madrid combo signing his first recording contract with DFX Records and edited in November Moebio (DFX / EMI) first album with ten compositions and excellent reviews that takes them through all Spain sharing the stage with different formations.
Moebio begins writing a story full of magic and light. Melancholy and hope reign in their texts, full of poetry and originality. MADRID HOTEL, their first single, reach number two in the chart rock video channel SOL Music and becomes an anthem for his numerous fans that fill the room Moby Dick in its presentation in Madrid. An extensive tour opening for Skizoo closes an amazing 2008 for the group that crown its first LP, with filming DOMINO , in the desert of Tabernas.
At the beginning of 2009 and in the middle of the road they create the ten songs that will be part of his second album, which they record in the same recording studios, OASIS , the Spanish capital.
For second time, by hands of Jorge Escobedo sign a round disc of melodic rock. Published in March 2010, the masterful GEOMETRÍA DEL ALMA (Cursed Records) conquer audiences and hand press FEARLESS , first single from the album, a song of liberty and the pursuit of dreams. A conceptual work further strengthens an original and forceful style with a great visual image.
The album features production and sound up to large international groups and stellar collaboration of singer Edith Salazar (OT, Miguel Bosé), the art work is led by the Basque artist Josu Torrealday .
Presented throughout the peninsula, the album makes it to the hearts of his fans, the CLUB ANIMA LIBERA, based in Madrid and Argentina and Mexico , the group spends the remainder of his tour.
In early 2012 MOEBIO focuses on the composition of their third and expected job soon come to record. The story continues with the release of his new single SECRETO, EL MOMENTO DEL DESEO a short film produced by TULA COOL and three incredible shot in the most romantic scenes in Madrid.
After a summer of intense compositional work, the group begins a new stage with boundless energy.
With a new web support intended to be closer to his followers and embark on a fall tour with some of the best emerging bands of the rock scene.
The group releases new music video, this time of a song in acoustic format, their first album “METAFORA”. Belonging to the ACOUSTIC SESSIONS, a collection of songs recorded in studio by the group during the first part of 2012, the song chosen contains a melodic and spiritual component that makes it unique. And begin an extensive tour called TOUR DEL ALMA, which leads them to explore the peninsula with reputable groups. A very special tour in which the band achieves a high level live, delivering its full potential and energy, with a powerful and heartbreaking set list. In 2013 the group takes a mini tour that takes them from Madrid to Barcelona with two great bands, EIKOSTATE and Finland SIX INCH, outlining a year full of hopes and dreams.
After presenting GEOMETRIA DEL ALMA nonstop in November to begin recording their third album expected in studies Royal Sound of Soto del Real, Madrid. Manufacturer chosen for this work is Ruben Villanueva, in addition to this new adventure.
VICTORIA is the name chosen for this third album. The VICTORY of a band with a full creative path of magic. Eleven songs with a highly emotional component and a fresh, modern sound that reflected in his writing and production.
The road continues.
VICTORY is ours.